Registration for this year’s WESLINE conference is now open! The event will take place at the Institut français in London on Wednesday 4 September 2019, kindly hosted by Marion Loire, the Head Librarian.  The overarching themes of the conference are the state of modern languages teaching and learning in the UK and predictions for the future, and the ways in which libraries and library language groups can be innovative in supporting language learning, teaching and research in modern languages.

Please find the programme and registration form below. All welcome!

We are delighted to announce that this year’s AGM & Seminar will take place on Monday 5th June at the Weston Library, Oxford. The theme of the seminar is Translation Studies, and we have an excellent line-up of speakers presenting this growing area of academic interest from a Hispanic perspective.

Speakers include Jennifer Arnold (Birmingham University), Tom Boll (UEA) and Richard Mansell (Exeter University). The event will end with a translation ‘slam’, moderated by Peter Bush. Literary translators Rosalind Harvey and Sophie Hughes will each argue for their versions of a chosen extract from Mónica Ojeda’s Nefando (Candaya, 2016).

A more detailed programme including the booking form is available at the link below.

As usual, students are welcome to attend the seminar free of charge. Please note that booking is required as places are limited and registration is compulsory due to the access requirements of the venue.

To reserve your place, please fill in and return the booking form by Tuesday 30th May.

We look forward to seeing you in Oxford!

The 2016 AGM & Seminar took place on Monday 27th June at Cambridge University Library. The theme of the seminar was Digital Humanities in Hispanic Studies. Many thanks to all our speakers and attendees, including Aquiles Alencar Brayner (British Library) who introduced and chaired the seminar.

Katia Chornik (University of Manchester) gave a fascinating talk on the Cantos Cautivos project, a digital archive of songs composed, performed and listened to in centres for political dentention and torture in Pinochet’s Chile (1973-1990). It is the first online archive of music and state violence from all contexts that uses crowdsourcing to compile its content. It is also the first online resource providing content related to music and dictatorship in Latin America. Developed in partnership with the Chilean Museum of Memory and Human Rights, and former political prisoners, it is part of Dr Chornik’s Leverhulme-funded research ‘Sounds of Memory: Music and Political Captivity in Pinochet’s Chile (1973-1990)’.

Ewan Kass-Cavanagh introduced us to the Quipu Project, a unique interactive documentary and communication network that combines film, the internet, code and imagery together with phones and on-the-ground outreach and activism. The Quipu Project shines a light into the lives and experiences of so many impacted by a five-year campaign to forcibly sterilize three hundred thousand indigenous women in Peru during the 1990’s. After almost 20 years their voices can finally be heard through this interactive documentary, which connects a free telephone line in Peru to the project website.

Dorothy Severin and Fiona Maguire presented the Electronic corpus of 15th century Castillian Cancionero manuscripts, a long-running collaborative project which has made available in digital format the material used by Brian Dutton for his seven-volume Cancionero del siglo XV : c. 1360-1520 (Salamanca, 1990-1). As well as the online website version of the Dutton project of courtly verse, they have also presented their own project of the longer moralistic, didactic and religious Castilian verse of the fifteenth century. For more information, take a look at the introduction to the project.

The 2015 AGM & Seminar took place on Monday 22nd June at the British Library. Many thanks to everyone who joined us for an overview of Portuguese and Lusophone studies and find out about current research in the field.

We were delighted to welcome Prof. Phillip Rothwell (Oxford), Dr. Vivien Kogut Lessa-de-Sá (Cambridge) and Prof. Hilary Owen (Manchester) to the seminar. There was also a library panel discussion and a presentation from Casalini Libri on acquiring books from Portugal and Africa in UK libraries. 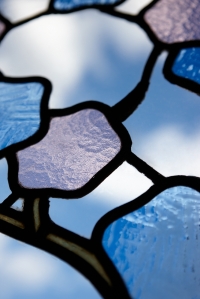 Barcelona Kaleidoscope opens a window on to Barcelona as a world city of culture.  Three speakers will present views of the city’s rich cultural landscape, its visual and performing arts, cinema and the history that has shaped it.

Maria M. Delgado is Professor of Theatre and Screen Arts at Queen Mary University of London and has published widely in the areas of Catalan theatre and film.  Andrew Dempsey is an independent curator.  He was formerly responsible for exhibitions at the Hayward Gallery where he initiated and organised the seminal ‘Homage to Barcelona’ exhibition in 1986. Josep-Anton Fernàndez is Professor agregat of Catalan Studies at the Universitat Oberta de Catalunya (Barcelona), and specialises in 20th-century Catalan literature and culture. Helena Buffery (Head of Spanish, Portuguese and Latin American Studies at University College Cork) will chair the seminar, which will conclude with a round-table discussion. Dr Buffery is an expert on Hispanic theatre and performance, translation studies and Catalan studies.

Organized by ACLAIIR and the Institut Ramon Llull in collaboration with the British Library.

The ACLAIIR AGM & Seminar 2014 took place in Cambridge on Tuesday, 17 June 2014, and we enjoyed an exciting programme of talks on the theme of Open Access.  For our first panel we had speakers from the world of mainstream academic publishing – Cambridge University Press – as well as the independent Open Book Publishers. We were also pleased to welcome representatives from OAPEN-UK, the JISC and AHRC funded collaborative research project on OA.  The second panel included researchers who are all engaging in different ways with Open Access, becoming involved with OA groups, writing about OA and developing OA projects. The full programme including speaker profiles is available below, and a full report is now up on the ACLAIIR blog.

Many thanks to everyone who joined us on 12th February for our one-day seminar discussing current trends in Latin American fiction and new research in the field. Topics included translating Latin American fiction, the contemporary Cuban novel, digital media and new literary genres, and alternative literary formats such as the graphic novel. There were discussions on collecting fiction from Latin America in UK libraries, and the landscape of the UK market for Latin American fiction. A full report by our very own Sonia Morcillo can be found on the ACLAIIR blog. 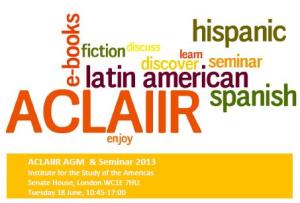 This year’s AGM and Seminar was hosted by the the Institute for the Study of the Americas, and took place in Senate House, University of London on Tuesday 18 June.The theme of the seminar was the supply of e-books from Spain, with presentations from Casalini, Iberoamericana and Digitalia, followed by discussion of the issues raised. Many thanks to everyone who came and made the day a success!
For those of you unable to attend, our speakers have kindly agreed to make their presentations available on the ACLAIIR website.

Click on the images below for links to the presentations from our vendors in PowerPoint format.

María Pizarro from Iberoamericana Verveurt speaks about their e-books and new platform, Ibero-Americana de Libros Académicos. Includes an interesting breakdown of the costs of producing e-books!

Lluís Claret of Digitalia gives us an overview of the different collections and acquisition models available.

The programme for this exciting event has now been confirmed. A one-day seminar organised by ACLAIIR, the Institute of Germanic & Romance Studies, and the Instituto Cervantes in London. Join us for an overview of recent trends in Spanish fiction, and find out about current research in the field. There will also be discussions on collecting fiction from Spain in UK libraries, and the landscape of the UK market for Spanish fiction.

The 2012 AGM was held in Oxford on Friday 29th June 2012.  We were very pleased to welcome the following speakers who took part in our seminar, Digital Resources in Hispanic Studies.

Many thanks to all those who attended a very successful day.

The 2011 meeting of the Hispanic Studies library group, ACLAIIR, was a joint event with the continental European association REDIAL (Red Europea de Información y Documentación sobre América Latina).  It was held at the British Library at St Pancras and also at the Institute for the Study of the Americas in London on Monday and Tuesday 20-21 June.

British, English, Irish, Scottish, Welsh and other European Adventurers in Gran Colombia (modern day Ecuador, Colombia, Panama and Venezuela) during and after the Wars of Independence (c.1810-c.1890)